The most awaiting ICC Champions Trophy game is now available for download. This champions trophy game is a patch comes with new features. It has new 2017 kits and logos for all the participating teams. The all will be of HQ (High Quality) and you won’t see in any other patch for cricket 2007.

Then it comes to the overlay. This overlay is just like as the default champions trophy overlay. You won’t find any difference in our overlay and in the original one. This ICC Champions trophy patch for cricket 07 not only contains these features it comes with more as well. The new and incredible stadiums.

All the players have HQ faces and all of them have their original names. All players have their unique Shirt numbers so, it will not effect your gaming experience. All the fixtures will be same. For the first time ever Bangladesh has qualified for champions trophy so they will also compete in the tournament. So, Download this patch today and double your gaming experience with us.

This champions trophy game won’t let bored by playing this patch because of its new features we have added. Now, the fielder will be more accurate. There will be more direct hits and more dives by fielders. We have also make a new gameplay for this patch that will bring you a highly user-friendly experience. Now you can play all your favorite shorts and these shorts are just like real.

To improve your gaming experience and you won’t get bored you can hit sixes on every ball it will be difficult to hit six on a ball. It has a realistic gameplay. To install and download this champions trophy 2017 patch then just follow some simple instructions.

1. Download this ICC Champions Trophy patch for cricket 2007.exe from below.
2. After downloading this patch, Download EA Sports Cricket 2007. No need to download if you already have this game.
3. Then download the ICC Champions Trophy roster file from below. It contains players name and their profile. These are important but only of few kb.
4. After downloading roster copy it to your cricket 2007 documents. These usually located in my documents.
Now you’ll enjoy this champions trophy patch for cricket 2007. We’ll be happy to serve you patches like this.

Features Of This Patch:

1. It has a realistic overlay.
2. Realistic gameplay for more enjoyment.
3. New and HQ stadiums.
4. The real player with real faces and names.
5. New camera for cricket 2007.
6. No six hitting on every ball.
7. All the players have their first abilities.
8. New Kits for all the 8 teams.
9. New umpires.
10. New menu overlay and broadcasting logos.
11. Actual fixtures for all matches.
Patch Screenshots:

This champions trophy 2017 game patch is one of the best patch ever made. You’ll find real players with their real faces. Now fielders are more accurate they will field with more accuracy. They’ll now catch the ball with dives and stop more boundaries which make it difficult for you to score runs. Now you have full control over the fielders. You can now move the fielders wherever you want or can throw the ball to the keeper or to the bowler’s end.

Now there were new kits for all the participants. They got their official logos. The matches will be played at the same venues like in real. Now it pretty difficult to hit every ball out of the park because of its modified gameplay. There were new players like Virat Kohli, Joe Root, Kane Williamson, etc. with their first stats in the official Champions Trophy game patch 2017. 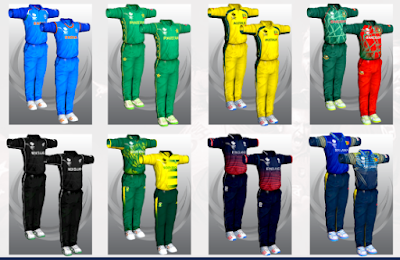 Now you can play new shorts like a scoop, uppercut and the most productive reverse sweep. Now there will be more agricultural shorts and the classic shorts. The stadiums were also modified, and they give a new look to the cricket 2007. This champions trophy game patch will double your gaming experience by its graphics and sound. It has a new overlay and menu which brings you a better gaming experience. Its overlay is just like as the original one.